Pat Hynes spoke on “War and Warming: Can We Save the Planet without Taking on the Pentagon?” on April 4, 2019 in Albany, NY.

Listen to her interview with the Sanctuary for Independent Media on April 3.

Waging Peace: From Jane Addams to ICAN at “Rediscovering Jane Addams in a Time of Crisis” – a public forum 11/11/17 at Edwards Church in Northampton, MA.

A discussion about the role of war and the military in causing global warming. How much does the U.S. military contribute to climate change? What happened to the old anti-war movement? Can we afford a 10% increase in the military budget? Do we need it? How does the issue of the military’s role in climate change fit into a broader social change agenda, including local movements of resistance?

Interview with Patricia Hynes, director of the Traprock Center for Peace and Justice, conducted by Melinda Tuhus. Hear the interview here.

Pio and Chelsie sit down with longtime artist and activist Sarah Pirtle of Shelburne Falls, Mass. to talk about her decades of feminist and anti-racist work. She is organizing a one-day conference on January 23, 2016, Common Threads, focusing on intergenerational voices of women.

On September 7, 2011, Pat Hynes was interviewed about the costs of American Militarism. Pat talks about her series “War and the Tragedy of the Commons” in this radio interview (20 minutes.)

Renewables Are Ready is a presentation developed in response to the defining issue of our times – climate change. Our goals are to inform about the advances in renewable energy technologies and their potential, together with efficiency, to power our country by 2050 and to identify the political obstacles in getting there. We finish with inspiring examples of action and activism that serve as a springboard for brainstorming about individual and community actions to make renewables our energy future.

The newest episode of The Song features Sarah Pirtle of Western MA. A multi-talented singer/songwriter, Sarah is also a teacher, an activist, an award winning author and more. On The Song she performs songs about courage that are on her new CD, Everyday Bravery. Wonderfully inspiring songs that are beautifully written and performed with great talent and skill!!!!!!!!!!!!

Frances Crowe – Still going strong at age 96, this legendary peace activist (and friend of the Futter family) has lived and worked in Northampton for over half a century, where she ran a regional office for the Quaker-based American Friends Service Committee for many years, and recently published her memoir, Finding My Radical Soul.

Rev. Sarah Pirtle, MEd. – Inspired by Frances Crowe to work for social change, this peace educator and musician based in Shelburne Falls has published 5 books and 9 CDs for adults and children, taught graduate education courses on social skills and music, and founded the Discovery Center for Peacebuilding in 1992 to provide school residencies.

Alicen Roberts – Also inspired by volunteering with Frances Crowe as an undergraduate student, this 2012 graduate of Smith College and veteran of living and working at the intentional community Agape in Hardwick is now making a difference at Cooperative Metropolitan Ministries, “the greater Boston area’s oldest interfaith social justice network.” 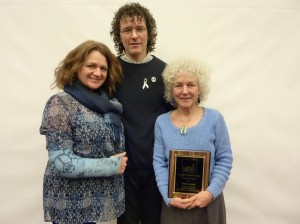 Abbie Jenks, longtime board member of the Traprock Center for Peace and Justice, was awarded Greenfield Community College’s 2014 “Living the Dream” Award with the inscription: “in appreciation of your passionate commitment to social justice, inclusion and opportunity.”
Abbie is a GCC Professor and founder of the Peace, Justice and Environmental Studies Option at Greenfield Community College. At the award ceremony two of her students, Barbara Broussard and Eric Blevin, praised her as working in the tradition of radical social worker and pacifist Jane Addams and guiding their Peace Club in Keystone XL pipeline demonstrations, Hurricane Sandy relief, and non-violence pledges to protect women from abuse.

See this article in the Recorder on 3/1/2012, by Pat Hynes and Abbie Jenks

See this article in the Recorder on 2/20/2012, a report on the Roots of Peace series event

Where Are We Now?

Gauging national conscience 10 years after terrorist attacks
By Richie Davies, Recorder Staff , Greenfield Recorder
9/10/2011
GREENFIELD — A decade later, it’s back to Ground Zero. As the dust has settled from the tragedy of that Tuesday morning, what has taken hold is a culture that many see as fearful and a society that’s moved away from guarding its civil liberties toward protecting itself from a nebulous enemy, say several area observers.
“It’s raised up an age-old tension between security and freedom,” said Abbie Jenks, who directs the Peace, Justice and Environmental Studies Program at Greenfield Community College. “It’s become a little difficult for people to determine how we’re really at risk in terms of another attack like the one 10 years ago, and how much of it’s just the media playing it up or people wanting us to accept some dismantlement of our civil liberties.” Read more…

The art of peacemaking

GREENFIELD — What does peace mean to you? When this question was posed to students at Newton School in Greenfield, they first answered by creating lists of what peace means to them, lists which included words like love, hope, kindness, care, recycle and friendship. Read more… 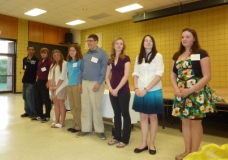 This year’s Peacemakers all distinguished themselves by helping out their fellow students, whether it was by sitting with others who were all by themselves at the lunch table, helping fellow students resolve conflicts or raising money and sending books to children in Uganda.

On Thursday evening, about 60 people gathered to honor the 2011 Peacemakers at a reception at the Franklin County Technical School.
Read more…

GREENFIELD — Takaaki Morikawa still remembers, 65 years later, the screaming and groaning he heard when at 6 years old he lay critically ill in a hospital, while 5.4 miles away an atomic bomb hit Hiroshima, Japan, on Aug. 6, 1945. Read more…

No repeat of this tragedy

On the morning of April 26, 1986, an explosion in the Chernobyl nuclear power plant released a radioactive plume which hurtled four miles into the atmosphere. An intense fire burned in the reactor core for 10 days, continuously spewing radioactive particles and aerosols. Belarus, western Russia, and rich farmland of the Ukraine were immediately and severely contaminated. Winds carried tons of particles to many parts of Europe and throughout the Northern Hemisphere, blanketing 77,000 square miles with radioisotopes of iodine, cesium, strontium and plutonium.
Read more…

Will Obama repeat Eisenhower’s energy mistake?
Pat Hynes
2/5/2011
In 1951, President Truman created a blue ribbon commission to evaluate and propose a plan for the U.S. energy future. The 1952 Paley Commission Report, named for the commission chairman, proposed that the U.S. build the economy on solar energy sources. Read more…