WENDELL – Massachusetts is my home state, but I never took a real look at the state symbol until April 22, 2018, at an Earth Day event at the Wendell Town Hall. It opened with an “Earth Day Retrospective” on the ecological history and struggles in our area, featuring local activist David Detmold presenting on “Colonial land grab of Indigenous lands: brief review, then latest actions.”

One of those “latest actions” was the idea of changing the image that represents our state on every state flag, state police car door, courtroom dais, and more. A large slide showed an idealized image of a Native American from 1898. He holds an arrow upside down, while above him looms a broadsword, modeled on that of Myles Standish, murderous Plymouth colony military commander. 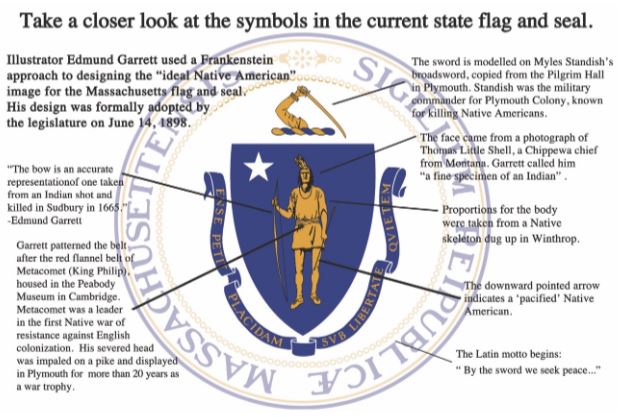 We learned that former state representative Byron Rushing, a Democrat from Boston’s South End, had filed bills for 34 years to form a commission to invite Native leaders of the Commonwealth to sit with state legislators and the Secretary of State to reconsider the symbol, and choose something more appropriate for our time. Without success.

In spring 2018, Wendell, Gill, New Salem, and Orange passed the first town meeting resolutions to support establishing such a commission and change the official symbol of our state.

Now 23 of Franklin County’s 26 towns have passed similar resolutions, along with cities and towns in Hampshire County, Cape Cod, and the Boston area. Currently 39 communities, a total of more than 10% of Massachusetts cities and towns, have gone on record in favor of changing the state flag and seal. It’s a movement now.

So is now the time? Indigenous activists say yes: that on the eve of 2020, the 400th  anniversary of the landing of the first British colonists in Massachusetts, we must reject racist emblems of the past. With that in mind, 16 of us from took a bus from western Massachusetts to Boston on November 19 to rally and testify at a hearing, before the Joint Committee on State Administration and Regulatory Oversight, on the House and Senate bills to establish a special committee to recommend a new or redesigned seal: H. 2776 and S.1877.

At a rally before the hearing, we heard state senator Jo Comerford speak, along with other supporting officials. She and Berkshire County state senator Adam Hinds cosponsors the bill in the Senate. Cosponsors in the House include Lindsay Sabadosa, Mindy Domb, Natalie Blais, Paul Mark, and Susannah Whipps.

Many eloquent members of various indigenous nations spoke at the rally, or gave oral testimony at the hearing. A woman from the Wampanoag Tribe spoke of the colonial atrocities against native people, saying “we’ve been struggling for 400 years for freedom,” and adding “I do not want to live under the threat of the sword.”

Fairies Gray, the Sagamore of the Massachusett Tribe at Ponkapoag, said his people had passed down oral history from the time when Myles Standish used his sword to cut off the heads of three of his ancestors – ambushed at Wessagussett – and mounted them on stakes in the center of Plymouth, less than three years after the Pilgrims first landed. A hush fell on the Gardener Auditorium as he spoke, choking back tears.

In addition to the effort to “Change the Flag and Seal,” the other four pieces of legislation included in the Massachusetts Indigenous Legislative Agenda 2019-2020 are: “Honor Indigenous Peoples Day,” replacing Columbus Day with Indigenous Peoples Day to celebrate Indigenous resilience and survival; “Protect Native American Heritage,” protecting objects of cultural patrimony; “Remove Racist Mascots,” ending the use of Native American mascots in Massachusetts public schools; and “Educate Native Youth,” seeking to improve educational outcomes and opportunities for American Indian and Alaska Native students.

For more information, readers can visit MAindigenousagenda.org, or ChangeTheMassFlag.com. Contributions to the effort can be made online at traprock.org/donate/.