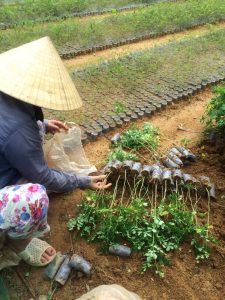 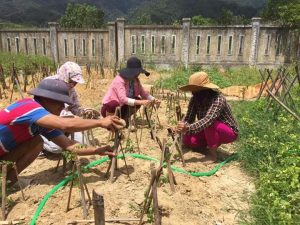 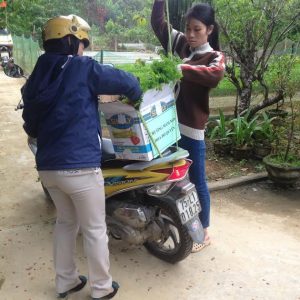 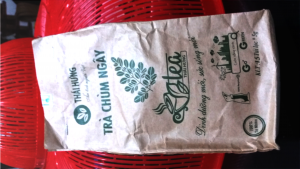 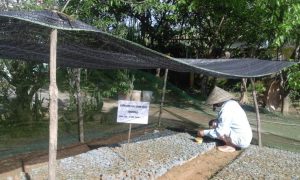 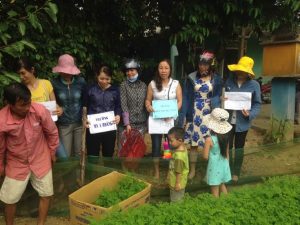 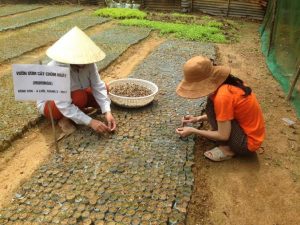 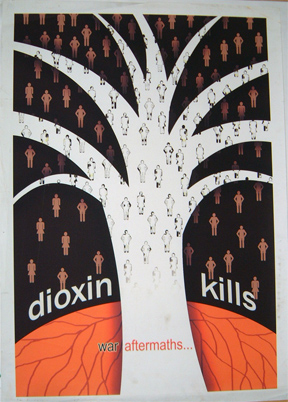 The purpose of my journey to Vietnam in March 2014 was to investigate the plight of 3rd generation Agent Orange-dioxin victims, dioxin contaminated sites, and ecological restoration in order to inform Americans of the on-going legacy of the “American War” in Vietnam and our responsibility and opportunities for undoing this legacy.

During the ten years (1961-1971) of aerial chemical warfare in Vietnam, U.S. warplanes sprayed more than twenty million gallons of herbicide defoliants, among them Agent Orange knowingly contaminated with an exceedingly toxic dioxin. In this methodical ecocide, up to one-fourth of South Vietnam was sprayed. By the end of the war, up to 5 million Vietnamese had been exposed to Agent Orange, which has since resulted in an estimated 400,000 deaths and disabilities and at least a half million children born with physical and/or mental birth defects across three generations. 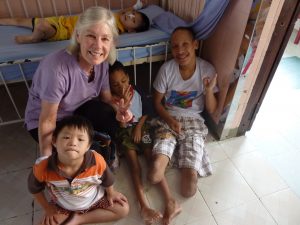 I visited models of community-based care for Agent Orange victims called Peace Villages that rival our best ones for handicapped children, staffed by people who spoke of the children as their family. I found that those working to rid Agent Orange from the Vietnam environment harbor no antipathy to American citizens, while they clamor for justice from the United States government to pay for the health and environmental costs from our 10 years of chemical warfare.

More than a dozen “Peace Villages,” some with organic gardens, orchards and animals, have been built for children and, in some cases, for Vietnamese veterans who have severe mental and/or physical challenges. Here they receive rehabilitative care and physical therapy; and those children able to learn are prepared for higher education or taught vocational skills, such as computer, sewing, flower-making, fabricating incense sticks, etc. Hundreds more Peace Villages are needed for the estimated tens of thousands of multigenerational victims. 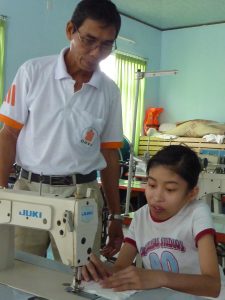 The Peace Villages are organized and built by the Vietnam Association for Victims of Agent Orange (VAVA) with funds from the Vietnam government and international supporters. Many staff and administrators are retired Vietnamese war veterans; and some staff are themselves physically handicapped from their parents’ exposure to Agent Orange.

When I asked about their striking commitment to the Peace Villages, the retired Vietnamese veterans, including VAVA President General Nguyen Van Rinh,, spoke of having lost so many friends in the war that, having lived, they want to give back to war victims. A young university student working in the VAVA Ho Chi Minh City office, said quietly, “Look at me,” pointing to his head shaped like a light bulb. “I hope my passion will contribute to other Agent Orange victims’ happiness and freedom.” Dr. Nguyen Tan, a medical doctor responsible for rehabilitative care of children at Tu Du Hospital Peace Village responded, “My life is bound to the Agent Orange babies, and I am passionate about their right to be treated humanely. “

Over the course of 2014 – 2015, I spoke to diverse audiences including interfaith peace and justice groups, university forums and classes, continuing education classes for seniors, a community fundraising event, Region 1 US Environmental Agency, and the Connecticut State Department of Public Health. These talks and my articles published in newspapers, journals and Internet news sites reached thousands of listeners and readers.

I thank all whose generous donations – $15,000 in total – provided scholarships for children in the Peace Village schools in Da Nang and Ho Chi Minh City. Mt. Toby Friends community initiated their own fundraising for a tree-planting project in a highly contaminated area of Vietnam. Finally, the Vietnam Peace Village visual presentation was filmed and is being edited into an educational video for wide distribution.

Pat Hynes is a retired Professor of Environmental Health from Boston University and author/editor of seven books. A feminist, peace and environmental justice activist, she directs the Traprock Center for Peace and Justice in western Massachusetts. 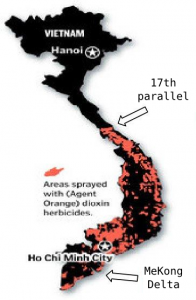 What Did US Government Know? 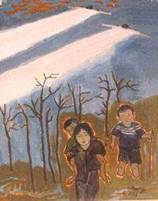 [quote]“When we initiated the herbicide program in the 1960s, we were aware of the potential for damage due to dioxin contamination in the herbicide. We were even aware that the military formulation had a higher dioxin concentration than the civilian version due to the lower cost and speed of manufacture. However, because the material was to be used on the enemy, none of us were overly concerned. We never considered a scenario in which our own personnel would become contaminated with the herbicide.”
–Dr. James Clary, Chemical Weapons Branch, US Air Force
[/quote]

10,000 Trees for Vietnam is an environmental justice project created in collaboration with the Vietnamese forester Phung Tuu Boi. Its purpose is to restore biodiversity to an area of central Vietnam that was heavily sprayed with herbicides, chief among them Agent Orange, during the American War in Vietnam. This project is a sequel to the Peace Village Project, which raised substantial funds for scholarships for third generation Vietnamese child victims of Agent Orange.