In this Aug. 6, 1945, photo released by the U.S. Army, a mushroom cloud billows about one hour after a nuclear bomb was detonated above Hiroshima, Japan.  AP 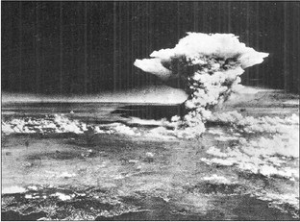 The current pandemic and the looming threat of climate chaos have heightened people’s awareness that humans as a species are vulnerable and that international cooperation is absolutely necessary in addressing these problems. When we combine this with the massive demonstrations against racism, one has a sense that major social changes may be possible. But another related threat often goes ignored and unmentioned — the threat of war.

For decades the government of the United States has pursued so-called “national security” with astronomical expenditures on weapons of war, at the top of which is our vast arsenal of “nuclear weapons.” I put “nuclear weapons” in quotations because these are not weapons in any real sense. Rather “nuclear weapons” are instruments of mass murder and genocide.

This August we commemorate the 75th anniversary of the atomic bombings of Hiroshima and Nagasaki, attacks that intentionally killed hundreds of thousands of Japanese civilians immediately and in the radioactive aftermath. We, the people of the United States, have never honestly faced these racist crimes against humanity. Instead we have continued on a path of destruction, spending trillions of dollars on wars and weapons, when we need to be devoting ourselves to international cooperation for the health and welfare of all people and all of nature.

President Eisenhower in his farewell address warned us, “In the councils of government, we must guard against the acquisition of unwarranted influence, whether sought or unsought, by the military industrial complex.” (Jan 17, 1961). And even more relevant were Eisenhower’s words on April 16, 1953. “Every gun that is made, every warship launched, every rocket fired signifies, in the final sense, a theft from those who hunger and are not fed, those who are cold and are not clothed. This world in arms is not spending money alone. It is spending the sweat of its laborers, the genius of its scientists, the hopes of its children…. This is not a way of life at all, in any true sense. Under the cloud of threatening war, it is humanity hanging from a cross of iron.”

It was little more than 10 years later, on June 10, 1963, that President Kennedy delivered a critically important speech about peace at American University in Washington, D.C. President Kennedy’s speech came after his harrowing experience in the “Cuban Missile Crisis” when the world narrowly escaped catastrophic destruction. The president was able to find a way out of the crisis, because he had previously developed a private correspondence with Soviet Premier Nikita Krushchev. Based on that correspondence they were able to understand each other and find common ground.

President Kennedy opened his discussion with the following words: “I have … chosen this time and this place to discuss a topic on which ignorance too often abounds and the truth is too rarely perceived – yet it is the most important topic on earth: world peace.

In his speech President Kennedy tried to articulate for the American people the principles that are necessary for a different kind of world order and provided a rough road map of how to get there. At this moment, it is essential to go back to President Kennedy’s speech. I urge everyone who is reading this article to go to the text of that speech, read it, listen carefully to it, and ponder its message. The vision articulated in this speech by President Kennedy is critical for the survival of humankind today. Peace will only be possible, if enough of us take some small measure of responsibility for it. Once you have listened to the speech and read it, you can print it out, and share it with family, friends, neighbors and co-workers. Then you and they can join in seeking to make real President Kennedy’s vision.

Martin Schotz, MD, is a retired physician living in Cummington and a member of the Peace Task Force of Franklin County Continuing the Political Revolution. He can be reached at eli.schotz@gmail.com.