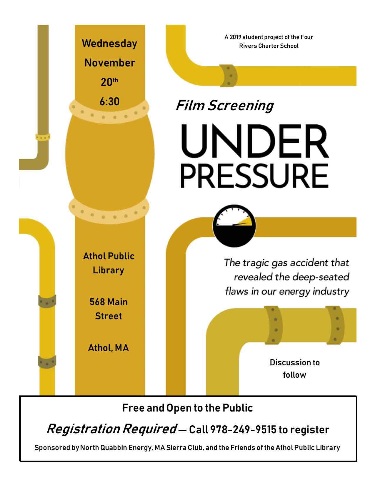 The tragic gas accident that revealed the deep-seated flaws in our energy industry.

The North Quabbin Energy citizens group in collaboration with MA Sierra Club and Friends of the Athol Public Library offers a one time free showing of “Under Pressure” at the Athol Library, 568 Main Street. The November 20 event starts at 6:30 pm. This original film by the senior class of the Greenfield MA Four Rivers Charter Public School describes and analyzes the devastating gas explosions in three Eastern Mass. communities, with extensive research and interviews.

Why did this disaster happen, and could it happen again? These were some of the questions asked by a team of seniors from the Four Rivers Charter Public School in Greenfield who chose the disaster and its difficult aftermath as the focus of their 2019 senior film project.

“This film is powerful,” says North Quabbin Energy organizer Diane Nassif, “speaking to issues affecting the lives of hundreds of thousands of gas customers. It also relates to on-going citizen efforts to stop construction of fracked gas pipelines throughout the state and beyond.”

Post-film discussion will feature B.U. professor Nathan Phillips, an expert featured in the film. His work includes the first mapping of gas leaks in a major city – Boston!

The event is free of charge and all are welcome, but to ensure space on a first come, first serve basis, the library requires advance registration by phone. Save a seat now by calling the library at: 978-249-9515. For more information, see: https://www.facebook.com/events/544147173062624/

The trailer to “Under Pressure” can be seen at: https://www.youtube.com/watch?v=mCYEVXwDrPk

North Quabbin Energy, founded in 2005 by members of energy committees in local towns, works to save and improve energy and environment in the area. See more at northquabbinenergy.org/