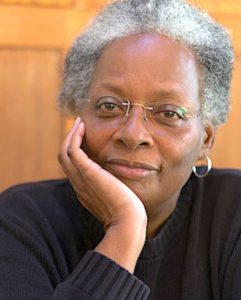 Mandy Carter is a Resistance Studies Fellow at the Resistance Studies Initiative at UMass Amherst, and a southern black lesbian activist with a 52-year movement history of social, racial, and LGBTQ+ justice organizing since 1967. Raised in two orphanages and a foster home as a ward of state  of New York, Ms. Carter attributes the influences of the Quaker based American Friends  Service Committee, the former Institute for the Study of Nonviolence, and the pacifist-based  War Resisters League for her sustained intentional multi-racial and multi-issues organizing.

Ms. Carter, 70, serves on the National Council of Elders who are 20th century organizers committed to the theory and practice of nonviolence that includes veterans of a wide range of 20th century civil rights, justice, environmental, LGBTQ, and peace movements. We are united to engage with organizers of the 21st century. In 2005, she was nominated and included in the 1000 Women for the Nobel Peace Prize 2005.The 1000 women from 150 countries were guided in their work by nonviolence, integrity, and selflessness.

ABSTRACT: How can we form collaborations between activists from communities of color, gender, class, religion or sexuality? Mandy Carter will present and discuss possible models developed this fall by a group of diverse activists of how we can work with alliances between different identity groups.

Refreshments will be served.
Open to all.