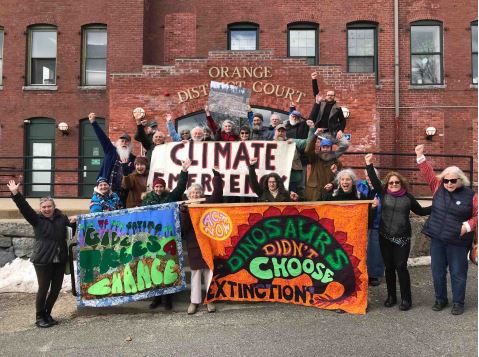 Wendell State Forest Alliance members and supporters before the Franklin County Superior Court after summing up their case on February 28, 2020. Photo: wloe/anna gyorgy

By H. PATRICIA HYNES
Originally published on March 11, 2020 in the Greenfield Recorder

On Thursday, Feb. 27 of this year, a Portland, Ore. jury refused to convict the so-called Zenith Five — activists fighting for a “habitable future” — for blockading a train track used by Zenith Energy Corporation to transport crude oil. Their blockade consisted of building a garden over the rail line making it impassable for the transport train. Their defense: they were justified in breaking the law on behalf of the planetary climate crisis. Five of six jurors voted to acquit them.

The next day 16 members of the Wendell State Forest Alliance (and supporters) gathered in Orange Municipal Court for closing arguments on why their trespassing to prevent state-supported logging in the Wendell state forest was necessary and justifiable. The judge will likely render his decision in May. “Social change happens by having people who … make sacrifices to bring critical issues to the attention of a larger public,” explained their lawyer, Luke Ryan.

Thanks to citizens who practiced civil disobedience throughout the past 250 years, we are not only an independent country but also a more democratic, inclusive and moral country. Think of the Boston Tea Party: On Dec. 16, 1773, colonists dumped 342 chests of tea
belonging to the British East India Company into Boston Harbor to protest a British tax (taxation without representation) and  monopoly on tea. Our history books lionize their act of civil disobedience as a catalyst of the American Revolution.

Think of Henry David Thoreau of Concord, Mass.: He was arrested In July 1846 for refusing to pay his taxes in protest of slavery and the U.S. occupation of Mexican territory (later Texas) for the sake of expanding slavery. Today Thoreau is an icon, a model of acting by one’s conscience in the face of government wrongdoing and for laying an ethical foundation for civil disobedience in his pamphlet “Civil Disobedience.”

Think of Harriet Tubman: She escaped slavery and, then, at extreme risk to her own life, became a conductor on the Underground Railway, leading African slaves to freedom in defiance of the Fugitive Slave Act. Today Tubman is a nationally revered symbol of
living by conscience; and our country is more democratic for her actions.

Think of the suffragists: Their picketing, relentless lobbying, and creative civil disobedience and nonviolent confrontation compelled a reluctant President Wilson to support a federal women’s suffrage amendment, ratified as the 19th Amendment in 1920. Their successful dissent gave one-half of the population of this country the freedom to vote and the goal of equal rights for women.

Think of Rosa Parks: In Montgomery, Alabama, “the mother of the civil rights movement” was jailed for refusing to give her seat on a public bus to a white man, in violation of the city’s racial segregation laws. Her historic challenge to Montgomery’s racist bus laws sparked the successful Montgomery bus boycott, organized by Martin Luther King Jr. When Rosa Parks died in October 2005, the U.S. Congress honored her by having her body lie in state in the U.S. Capitol Rotunda.

Think of decades of protest and civil disobedience by hundreds of disability rights activists: In 1990, the Americans with Disabilities Act became the most sweeping disability rights legislation in American history.

Thousands of climate scientists are warning governments, with an existential sense of urgency, that we are doomed within decades if we do not act immediately to slow the climate crisis.

• October 2019: 400 scientists state that civil disobedience to slow the climate crisis is necessary and justified.
• Same month: 11,000 scientists worldwide declare a climate emergency.
• November 2019: UN reports that devastating impacts of climate crisis are imminent. Drastic action is needed.
• Same month: Scientists warn that our earth is approaching tipping points, which will cause a cascade of irreversible climate impacts.
• Tipping point is reached in January 2020 forest and bush fires in Australia. The ecosystem will never return to forest and bush.

What we — citizens, corporations, courts and government — do about the climate crisis will determine life on earth within the next decades. It is a paramount ethical issue of our day — as were independence from the British Empire, abolishing slavery, winning women’s right to vote and civil rights for African Americans and the disabled. The historic protesters were judged criminals by the courts of their day. In time they were regarded as people of conscience who held their country to a higher moral standard against unjust laws, policy and practices — that is, their crimes were justified in order to prevent greater harm.

And we are the better for it.

Pat Hynes directs the Traprock Center for Peace and Justice.