Read this article from the Daily Hampshire Gazette:

Calling for no more nukes: Protesters turn out for International Day for the Total Elimination of Nuclear Weapons… “Around 20 protesters converged on Prince Street outside one of defense contractor L3Harris Technologies’ branches on Saturday to not only protest nuclear weapons, but also to draw attention to the defense industry at large. When L3 Technologies and Harris Corp. merged in 2019, the company said it had created the sixth largest defense company in the country with around $17 billion in revenue.”

Sunderland:  Susan Triolo reported that: “We had 8 people at our Cries from Every Corners stand-out today.  5 women, 3 men, including Brother Kato from the Leverett Peace Pagoda.  We had lots of waves and smiles, and some beeps though more subdued honking than usual.” 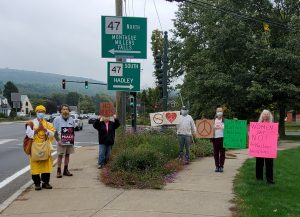 From the Greenfield Recorder:

Members of the Greenfield and surrounding communities gathered on the Greenfield Common Saturday morning, joining a national movement in support of eliminating nuclear weapons.

Activists stood on each corner of the intersection from 11 a.m to noon on Saturday, according to Anna Gyorgy, communications coordinator for Traprock Center for Peace and Justice. A standout was also expected to take place on Saturday in Sunderland.

The date for the standouts was chosen, Gyorgy explained, in recognition of the United Nation’s International Day for the Total Elimination of Nuclear Weapons, which was established in the months following a meeting of the UN General Assembly in 2013.

The standouts on Saturday were two of the five expected to take place across Western Massachusetts.

“I think it’s important to keep the awareness of the dangers of nuclear weapons and development,” Gyorgy said. “These are present. A lot of people think we fought all that in the ’80s, that it’s not an issue anymore. But there are a lot of regional hotspots, like India and Pakistan, the Koreas.”

Gyorgy said there is still a danger of accidents from nuclear materials and missiles, and what people like those who stood out on Saturday are advocating for is the rapid “phase out” of such materials.

A press release from the Traprock Center for Peace and Justice stated that the Treaty on the Prohibition of Nuclear Weapons is six ratifications shy of the 50 necessary for it to take effect.

“That’s something that gives hope,” Gyorgy said. “It’s not just little people standing on street corners. There is an international effort.”

She added that Western Massachusetts was a leader in the nuclear freeze moment between 1980 and 1982.

“Our area, there is this history,” she said. “We kind of stand with the people who have had this concern for a really long time.” Mary Byrne can be reached at mbyrne@recorder.com or 413-930-4429. Twitter: @MaryEByrne 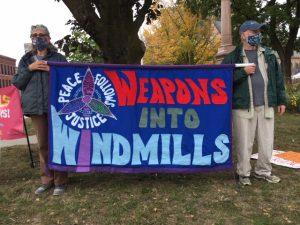