“What do you think of Western Civilization?” a journalist asked Mahatma Gandhi, who replied, “I think it would be a good idea.” I’ve been thinking about this for decades, with increasing understanding, keeping open to the realities of the ravaging of Mother Earth.

I’ve learned of extractions, poisons, “developments” and deforestations, as millions of human and non-human lives have been wasted. High-tech wars (bombs, herbicides, radioactivity, ever-more deadly systems) are very costly. The U.S. government spends more on the military- industrial complex than the next top seven countries combined, including our 800 military bases around the world. Trump talks of billions for a new nuclear arms race and nuclear-weapons testing.

We are about to commemorate 75 years since the U.S. bombings of Hiroshima and Nagasaki (Aug. 6 and 9, 1945) and need to mobilize our communities to demand: “No nukes! Never again!” Especially in this pandemic (COVID-19, nuclear weapons, wars, climate crisis) we need to face reality. We’ve already missed the 75th anniversary (July 16) of the U.S. exploding the world’s first nuclear detonation, in New Mexico (“Trinity” – ironic, as the scientist team didn’t know if it would devastate the atmosphere…) Then they rushed on to create the bombs to be ready to drop on Hiroshima and Nagasaki on Aug. 6 and 9, to show the world that U.S. is No. 1. The images of destruction and the 200,000 people killed and countless with horrifying wounds should have been enough for the world.

But the U.S. carried out 67 nuclear tests from 1946 to 1958 in the Marshall Islands (Bikini and Enewetak) with the equivalent of 1.6 Hiroshima-sized bombs daily for 12 years!

They did some “studies” on the people (in 1954 and in 1979) … and survivors speak out today to say the world must get rid of these weapons. The UK and Russia also carried out nuclear tests with devastating consequences, and their survivors also urge “No more!”

If we haven’t learned from nuclear devastation yet, perhaps the COVID-19 pandemic is rousing enough people to see that extreme inequality and corporate exploitation have meant suffering for most people. What people want and should have is food, employment, respect, health care, clean water/ earth, community solidarity. Stop funding death/war/destruction and giveaways to the super-wealthy. It’s up to us – us!

Here’s another quote from Gandhi: “ Anything you do may seem insignificant, but it’s extremely important you do it!” We are many and together we can do better! Note that 122 nations signed the Nuclear Ban Treaty, and 40 have already ratified it (need 50 to become law). Join “No nukes!” on Aug. 6 in Turners Falls and on Aug. 8 in Greenfield. 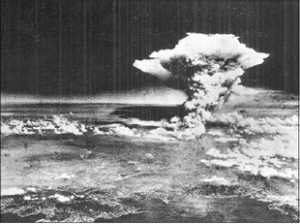 In this Aug. 6, 1945, photo released by the U.S. Army, a mushroom cloud billows about one hour after a nuclear bomb was detonated above Hiroshima, Japan.