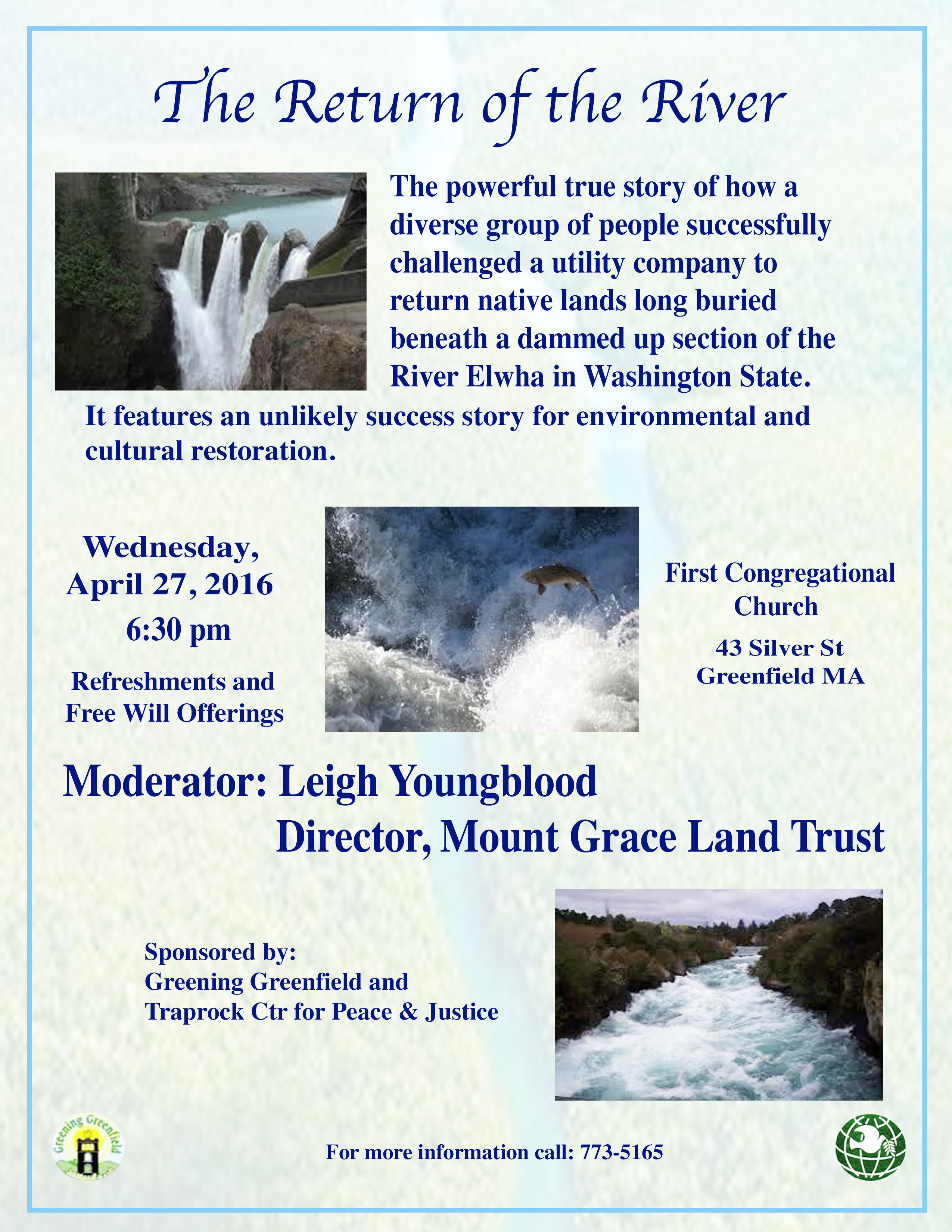 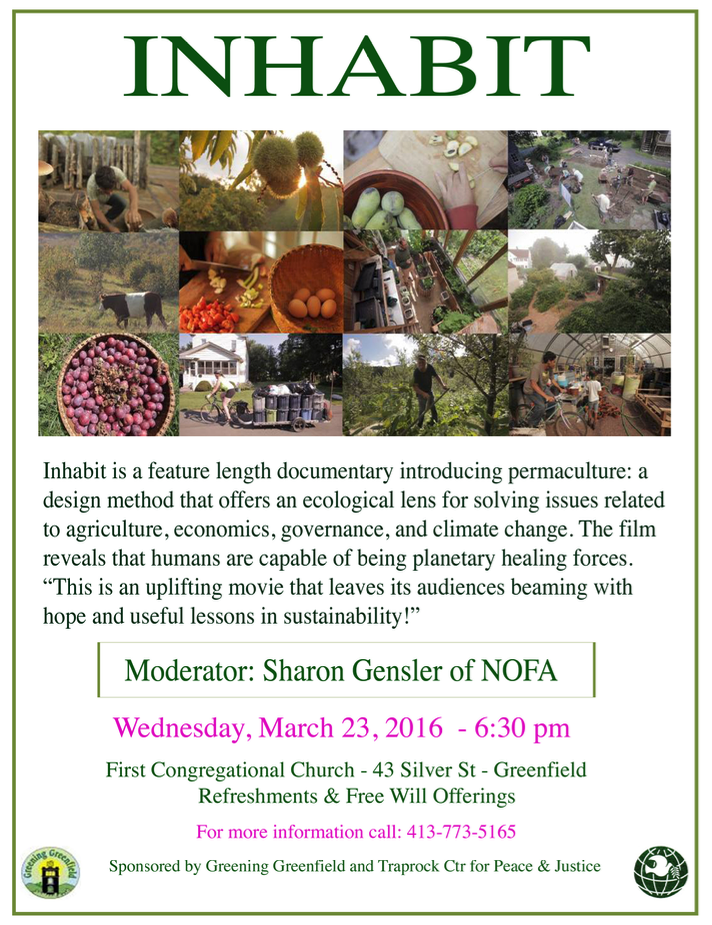 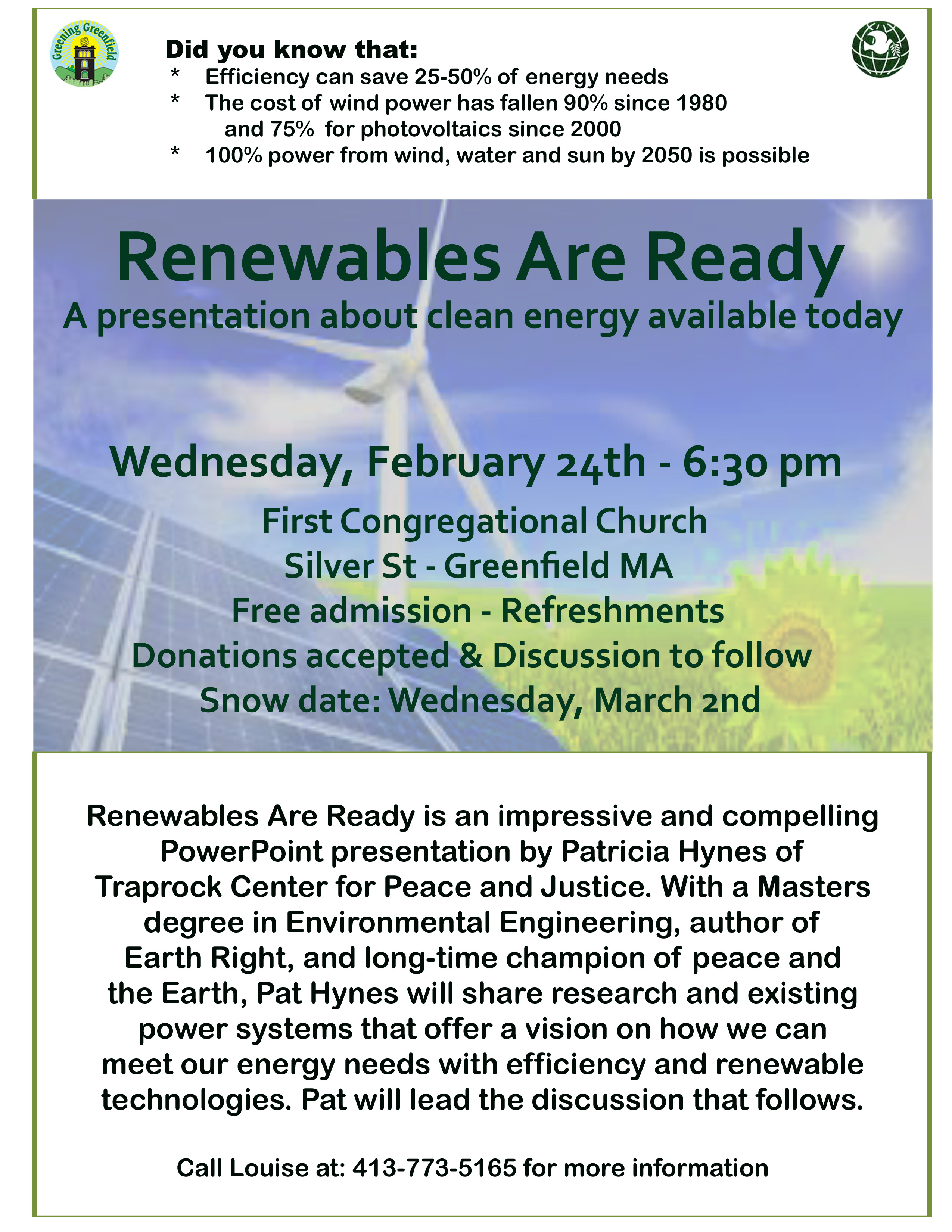 The Paris Climate Conference was the motivator for Greening Greenfield and Traprock Center for Peace and Justice to create together a 2016 spring film series with a theme of Climate Change Solutions and Action. With Greening Greenfield’s work toward a sustainable world and Traprock’s focus on peace and the end of violence against Earth and all living things, it is a natural partnership.

Everyone is invited to this free film series held on the fourth Wednesday of the month, 6:30-9:00 pm, at the First Congregational Church on Silver Street in Greenfield. There will be a 30-45 minute discussion after each film lead by an area expert to explore what we have learned from the film and how we might apply our new knowledge to our local issues. Refreshments will be served, and free-will donations will be gratefully accepted.

The series will launch on February 24 with Renewables Are Ready, a compelling PowerPoint presentation by Patricia Hynes of Traprock Center for Peace and Justice. With a Masters degree in Environmental Engineering, author of Earth Right, and long-time champion of peace and the Earth, Ms. Hynes will share research and existing power systems that offer a vision on how we can meet our energy needs with efficiency and renewable technologies, and cut climate change emissions to near-zero without drilling for, digging for, or transporting more oil, gas or coal. Ms. Hynes will lead the discussion that will follow.

The second film, “Inhabit,” held March 23, focuses on how we and the planet can all profit from permaculture and other new ways of farming, which will increase food production, repair and improve the soil, and sequester carbon, the main cause of climate change. Much of this very beautiful film captures efforts right here in western New England.   Our discussion leader will be announced in advance.

The final film, “The Return of the River” will be shown on April 27. This powerful true story chronicles the path to victory of a small group of dedicated and diverse people, among the most central are Indigenous people, who came together, and successfully challenged the utility company to return native lands long buried beneath a dammed up section of a river. The post-film discussion will be led by Mount Grace Land Trust’s director, Leigh Youngblood, who has been advocating to keep Chapter 97 protected land from being used by Kinder Morgan for the Northeast Energy Direct pipeline, as a strategy to stop the building of the pipeline.

For more information on each film, or to make recommendations for films for 2017, go to Greening Greenfield’s or Traprock’s web sites, or call (413) 773-5165