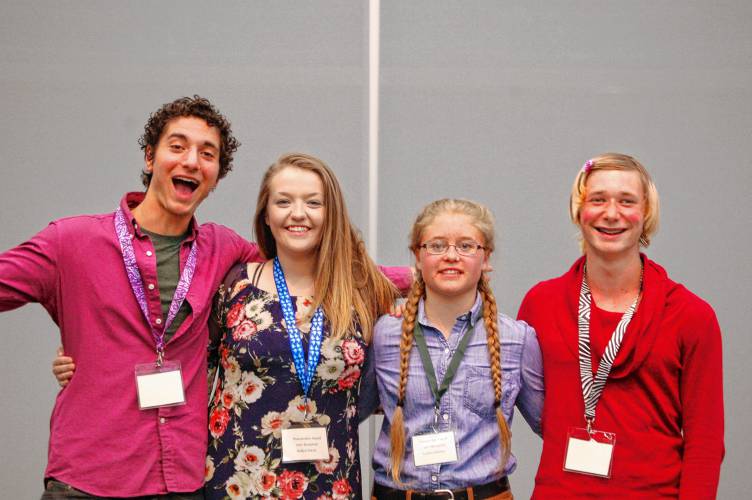 GREENFIELD — At the the 17th annual Peacemaker Awards Thursday night, four students expressed the importance of listening to others — even the youth.

“There’s a strong idea that the ideas and thoughts and drives that young people have are not as useful and important,” award-winner Larkin Christie said. “It’s really important that we recognize the wisdom of people who have lived on this earth bring, but I don’t want that to undermine the opinions and thoughts of young people.”

It was a testament that echoed through the crowd that gathered Thursday night for the presentation at Greenfield Community College. Christie, a co-founder of Youth Rise Together, a youth-led social action group for fellow teens in Franklin County.

“They’re role models both for younger children and for those older than them,” said Jessie Cooley, the District Affairs director for Rep. Paul Mark, D-Peru.

Cooley added: “(Mark) said peace making and youth leadership are needed more than ever. I think we all know that. People like him are working in the state government and he can’t do it alone. He knows he needs community around him.”

The evening, hosted by the Traprock Center for Peace and Justice and the Interfaith Council of Franklin County, recognized six teens: Levi Baruch, Kailyn Patria, Kayden Richardson, Avery Davidson Carroll, Larkin Christie and Darian Myers. (Richardson, of Greenfield High School, and Myers, of Frontier Regional School could not be present for the awards.) The winners received flowers, a certificate and a small stipend to spend as they please.

Co-chair of the event, Marcia Miller, expressed how she was impressed with the maturity that the teens from across the region displayed and with their “courage to stand up and say I am who I am.” Students delivered a speech to the audience in addition to answering questions as a panel, at the award ceremony first formed after the 1999 Columbine High School shooting and incidents of youth violence in Franklin County in an effort to recognize the youth in the area for working toward nonviolence and justice in the community.

When asked what the students would most like to see from the adults in the room, Larkin spoke about listening to the youth, as did her peers.

“Not to devalue anybody and come to the table willing to hear everybody,” said Baruch, who will be headed to Wesleyan University in the fall, is a member of Quabbin Mediation, and is a Training for Active Bystanders (TAB) Trainer. “I want to see a willingness to listen.”

“Harvey Milk had this great quote before he was assassinated: “If a bullet should enter my brain, let that bullet destroy every closet door,” Carroll said. “We have so many closet doors across the country.”

Carroll, who has spent recent years advocating for the rights of the Queer community, encouraged everyone to “have a conversation with somebody about something that feels uncomfortable.”

Patria, a junior Mahar Regional School, and TAB Trainer, spoke about her involvement in her school and the importance of individuals treating each other as they would want to be treated, pointing to how change starts.

“It starts there. It starts in your school, in your community,” Patria said.

This article originally appeared at: http://www.recorder.com/17th-annual-peacemaker-awards-recognize-local-students-9820818